Writing LOVING BEFORE LOVING: A MARRIAGE IN BLACK AND WHITE 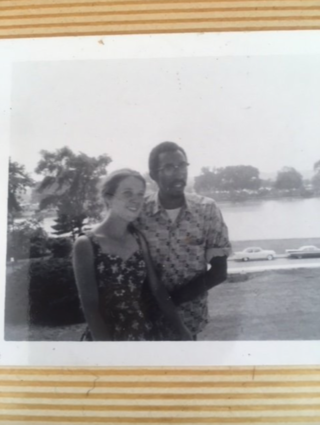 Julius Lester and Joan at a march in

If I had a nickel for each time a stranger has told me, "I know my life would be a bestseller!" I'd be wealthy. Sometimes they even offer their story, asking me to simply write it down. "My life has been so amazing, the book would write itself."

Well, not really. Books do not write themselves, and the record of lives is not laid out like a script, awaiting only transcription. A memoir, like any other book, is a deliberately created piece of art, using, in this case, one's life as the clay. But there are endless possibilities for shaping the raw material. What is the theme? The voice? Which events to include, which to highlight, how to connect them all? And why now?

On the morning of December 5, 2013, I stood by my mother Barb, holding her cool hand while she lay stretched out, unconscious, on a hospital bed in her living room. My sister, her partner, and I kept vigil for twelve days and nights, never leaving her alone. Now her breath rattled loudly. We understood the end was near. Yet the moment Barb suddenly went silent I screamed for my sister, "Come! I think she stopped breathing!" and began to shake. Just like that, I had no living parent.

For six months I grieved, so adrift I even informed startled friends, "I may not write anymore." After this profound loss, nothing mattered.

Yet eventually my fingers itched for the smooth feel of computer keys, and for the magical space writing opens in me. Abandoning long-suspended work on a contracted novel, I plunged into memoir. The need to make sense of my life—mine alone, not as anyone's daughter–skyrocketed, and the freedom, even from a loving parent, to say anything, unshackled me. I felt entirely free to speak my truth.

For three years I wrote, pounding out pages with various titles. Eventually, I sent my draft to an agent who, based on the first chapter, agreed to read it.

The agent, fortunately, liked the manuscript enough to retain an editor who supervised revisions as I settled on the coming-of-age-as-writer/activist theme.

One afternoon I called a highly recommended publicist I hoped to engage, thinking she might help me publish a major essay that could attract a publisher.

"What's the memoir about?" she asked.

"It's my work in the civil rights movement…" I began, naively believing that she, as a Black woman, would be riveted.

"And my marriage to a Black man in the early 60s, our children…" I continued.

"Now that's a subject I'd be interested in. What was it like to be interracially married back then?"

"Well," I stammered, vowing silently, Never! My ex-husband had become famous during our eight-year marriage, when his first book—which I edited—shot into the stratosphere, garnering glowing New York Times reviews. While I, an aspiring writer, stayed mired in diapers and dishes.

When my wife of forty years heard the publicist's response, she enthused, "That's a great idea. It's a framework to hang your story on. You can still talk about becoming a writer. After all, he was your first mentor, and it gives you a personal vehicle to talk about race. All your anti-racism work."

"No." I shook my head. "Julius Lester got so much attention. I am not going to focus the story of my life on him."

"The publicist is a good barometer, Joan. And that relationship was foundational. Your writing, your children, your doctorate. Your profession. Marrying him set the entire trajectory of your life."

A few days later I warily approached the manuscript. First I stripped away the opening six chapters, over which I'd labored for years.  Now page one showed me meeting Julius and our embarrassing first exchange, an explosive racially-tinged misunderstanding. I expanded his character and used that relationship as a theme to the final pages of the book, showing how it deepened in the decades following our divorce, right up to his warm condolences after my mother died.

The first publisher my agent sent this version to bought it, and I realized that this long-ago marriage had to be my theme. As I revised I worked on forgiveness—of Julius, and myself, for the ways we failed each other—and ended up feeling closer to him, grateful for our coupling, despite the pain. My wife was right: that first marriage to a gifted writer, a Black man at a time when our union was still illegal in twenty-seven states, indeed set my life course.

I didn't know when I started this memoir which story I would tell—which is why strangers proffering stories of their "amazing lives" can't provide the effortless books they believe in. But I was fortunate to eventually find my theme, one hiding in plain sight all along. Once I cut away extraneous material its perfection grew clear, like the elegant lines that emerge after pruning a tree. And as suddenly as my mother took her last breath, one morning while I lay quietly in bed a perfect title popped into my mind, confirming the rightness of my choice.

The writing process is indeed a magical one, and I am grateful to have gone through it enough times that I allowed myself the many revisions it took to find my way, confident the right story would someday emerge.

What's so wonderful about your memoir (in addition to being exquisitely written and gripping from start to epilogue) is that you managed to take your marriage to Julius as a deep theme without ever submerging yourself even as you told of the times you felt that you were. I loved this book...it evoked our shared history of living through the 60s to present time. And of the movement from the internalized sexism and racism to the issues still so present. Thank you Joan for sharing your story with such compassionate honesty.