HOW MANY TIMES DO YOU NEED TO REVISE YOUR MANUSCRIPT? 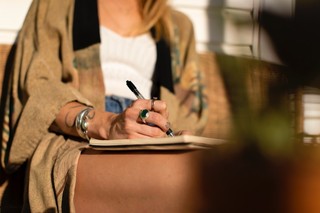 I am the queen of revision. Every one of the five books I've published has taken years. I write, revise, and revise some more. Whenever I finish a draft I think, "That's it!" But alas, after my agent or writing partner reads it, they notice flaws and I'm off again, occasionally even slanting the entire manuscript in a new direction.

Finally, once I've created something that's as good as I can make it, there's one more step: removing superfluous words, sentences, or chapters. My goal is a minimum 10% cut.

Some of the chopping is easy, like taking a red pencil to sentences. Remove nearly all qualifiers, like almost, nearly, rather, or really. (See how I used "nearly" in the previous sentence, and how much stronger it would be to write, "Remove qualifiers like…." No one is going to take this advice so literally they remove every single one. But one every two hundred pages will exert more power than ten.)

These qualifiers "are the leeches that infect the pond of prose, sucking the blood of words," write the delightful William Strunk and E.B. White in their classic Elements of Style.

Shortening prose by excising such words is easy, but sometimes trimming can be painful. The time comes in every revision when we must delete a cherished phrase—or entire section--because it clogs the flow. It might be our favorite passage, containing the most original metaphor ever to hit a printed page. Yet no matter how brilliant it is, the thought distracts from a narrative through line and does not belong in this book. That's when we have to grit our teeth and commit murder, enacting the classic writing advice to "murder your darlings." Pretend you're Lizzie Borden, swing your axe, and you'll find the improvement shocking.

Yesterday I got confirmation from my writing partner, Marissa Moss. For five years she's read countless drafts of my memoir; she's well familiar with the material. So I was amazed by a sentence she wrote in red track changes: "This is such a good scene – can't believe you didn't have it before!"

After a minute, I burst out laughing. The identical scene had appeared in the last version and Marissa is a careful, professional author/reader. But this time I'd reorganized several chapters and pruned the first hundred pages, which I'd asked her to read, by 20%.

Now this charming one-page scene, which had passed her by, became foreground.  At last she saw the picture I'd drawn: a white Methodist minister in 1962, red-faced and oozing anxiety, sputtering through his shock at meeting a black/white couple. This minister had appeared on my pages before, warning my beloved and me away from a marriage still illegal in 27 states. But he'd evidently been invisible. Why?

He'd been buried under too many other scenes and sentiments. Once I eliminated surrounding material, he popped.

It's astonishing that this latest revision made such a difference. Marissa's comments are effusive: "It's all wonderful, much richer, much more interesting. Everything is so much more alive." The strange thing is I barely added any new material. I shaded characters with a bit more detail, but mostly I cut, cut, cut.

"Do not be afraid to seize whatever you have written and cut it to ribbons," say my mentors Strunk and White. "Remember, it is no sign of weakness or defeat that your manuscript ends up in need of major surgery." Or, as writer Adam Gopnik describes it, when revising we need to practice "the aesthetic of abridgment."

That's the nature of writing. As I tell my writing clients, books aren't written, they're rewritten. Take out that cleaver and let the beauty of your writing shine.

So on the mark! As usual.. wonderful insights to best writing

I love to revise. Could do it forever! Lol Nonetheless, some error always slips through.

Excellent blog. So true, thank you for this. And, yes, I am a compulsive reviser/editor, and yet still find typos, the bad sentence, etc...when years later I reread something I revised over and over.