WHAT DID YOU SEE IN THE DEMOCRATIC DEBATE? 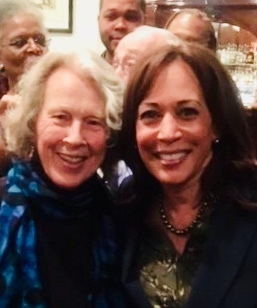 How can we ever know that what we think we saw is what really happened? I've been fascinated by this question ever since I saw Rashomon sixty years ago: a film where four witnesses describe a murder, but each tells a conflicting version. Maybe one or more are lying, or maybe they simply saw divergent—competing—"truth" because of their different perspectives.

This came to mind when I saw today's shocking New York Times page one headline about yesterday's Democratic Debate #2. It read: FACE TO FACE, BIDEN AND SANDERS MAKE CASES FOR DUELING VISIONS.

"What?" I shouted to my wife. "Look at this. Were they at another debate?"

"It's implicit bias," she said.

I looked at her questioningly.

"They didn't see what they can't see."

I glanced at the byline. Two men. "But Kamala eviscerated Biden and he stumbled. He actually defended anti-busing policies of the 70s!"

"Where is Kamala?" I sped through the article. "All the pundits, social media, online Times stories, the Nation, everyone said she was the major winner. It wasn't about Biden and Sanders anymore. She was the story. That's why every channel wanted to interview her after the debate!"

I found the first mention of Harris in paragraph twenty, well into the story on the inside page. Then two brief paragraphs.

"They didn't see her," I fulminated. "Listen to this: 'She has struggled to settle on a message…She has appeared equally unclear about whether to embrace or run from her record as a prosecutor.' That's it. She struggled, she's unclear. Wow. They never mention her brilliant moment, the one other headlines called the most powerful of both nights."

"Implicit bias," Carole said again. "They were focused on the two leading white men, so nothing else entered their consciousness. She acted like a prosecutor and they couldn't see that. She was essentially invisible to them. It's neuroscience. It's how the brain works."

"Wow," I said, wondering what I didn't see. Maybe it was Mayor Pete's Christian/religious anti-GOP argument, which many commentators considered brilliant. As someone raised in an atheist home, those remarks completely passed me by. I wasn't interested so I didn't get their importance.

And I thought back fifty years to a time when I had two very young children, a boy and a girl. Passionate about both of them, I could have sworn I treated them equally, although the girl (older) seemed to demand more attention. But once when we were houseguests of a dear friend in Maine,  she took me aside.

"Joan," she said. "I'm noticing something disturbing. Whenever Che climbs up on your lap, Rosa comes over and pushes him off. And you let her do it. She wants you all to herself and you don't make any move to protect Che. To give him equal time."

I couldn't believe it. But my friend, ten years older, was a mentor. I listened. And I began to watch. It was true. Rosa interrupted Che whenever he talked to me, she did often push him away from me, and I'd hardly noticed.

I felt terrible and vowed to change my behavior, make sure my adored Che got what he needed.

That incident has stuck with me all these years: how could my mothering have been so discriminatory, and I so unaware? It taught me something about implicit bias: we don't know what we don't know, and our prejudices influence what we actually see. At the time I was deeply involved in the early feminist movement, focused on empowering a girl child. Of course I loved Che just as much, but my actions weren't reflecting that. I didn't see what I didn't see.

So I understand the Times headline today, though it boggles my mind. The two men who wrote the article didn't see what I, and millions of others, saw.

During this campaign, where we have several powerful women contending for the Democratic nomination, let's be aware of implicit bias, even as we check our own preconceptions and assumptions. It's a powerful moment for learning.

Joan, one of the best summaries of the debates that I've seen. And I love the photo. Thank you for writing.

this is indeed amazing and clearly shows the bias so prevalent in the treatment of men-women. More horrific story recently in the New Yorker--"stand your ground"--180 degree differing treatment according to gender in Alabama.