BLACK, WHITE, OTHER: In Search of Nina Armstrong 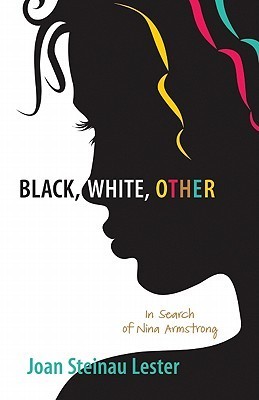 "The simple contrapuntal narrative of Sarah Armstrong's escaping slavery distinguishes the book emotionally and psychologically...Lester writes with social sensitivity and an ear for teen language and concerns. This is engaging treatment of a challenging subject that comes with little precedent." Starred Publishers Weekly review

"Teens will be caught by the alternating stories, and yes, by the messages about the cruel cliques and prejudice, then and now, which will make for great group discussion." - Booklist

2015: SELECTED AS TEEN CITYWIDE READ BY SKOKIE, ILLINOIS, FOR ITS "COMING TOGETHER IN SKOKIE" CELEBRATION.

Since her parents' jarring divorce, California teen Nina has felt split into two—two homes, two cultures. And due to racial tensions in nearby Oakland, kids at Nina's school are relentless about making her feel she has to choose sides—black or white. Nina begins to read about her great-great-grandmother Sarah, who escaped slavery, and whom her father is bringing to life. In fact, as Nina's old, safe world falls away, the voice of Sarah is often the only thing that feels real.

To whom can Nina turn? At this critical time in her life, she makes a decision that takes her on an unintended journey through San Francisco and closer to the truths she's been seeking. Relying on the faith she has in herself and those who marched to the same drum before her, as well as the still voice nagging at her from Sarah's tale, Nina begins to reclaim what is most important and helps those close to her do the same.

Dr. Lester's ability to capture the sensitive voice of a girl trapped between two worlds is remarkable. Weaving an honest story for anyone who's ever felt like an outsider, she offers readers the comfort of knowing they're not alone, and the strength to see them through adversity.

"Joan Lester knows how to get inside a girl's head. Nina feels like someone you know or really want to know. Readers will cheer her on as she faces the fundamental questions of who she is and who she wants to be." - Marissa Moss, author of the bestselling Amelia's Notebook series